Skip to content
Most of people are want to get Government Job in Nepal. The requirement procedure are also same for all level of Government jobs and objective questions are almost same. So, today, we are providing you ’40 Most Important General Knowledge for Loksewa Exam in Nepal’. Here we are included GK related to geography, history, current affairs, related of countries, various features of different nations, politics, rules and regulations, etc. sectors. 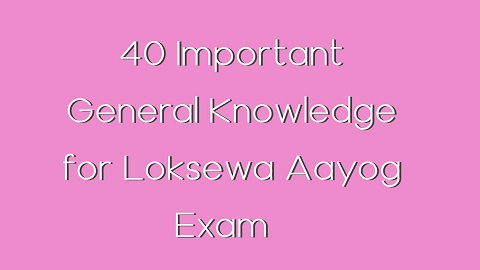 These questions and answers are mentioned in below:
1. Which is the first country to ban the use of plastic in the SAARC nation?
– Bangladesh
2. Who is the author of the famous autobiography ‘Long Walk to Freedom’?
– Nelson Mandela
3. Who is the first Nepali woman to climb the seven peaks of the seven continents successfully?
– Susmita Maske
4. When was Nepal’s Local Level 753 maintained?
– B.S. 2074 Saun 31
5. Who practices Navadurga dance?
– Suwarn Malla
6. Which is the first census institution in Nepal?
– Census Goswara
7. Which is the most popular drama in the world?
– The Mouse Trap
8. Who says, ‘Listen to all, and accept the truth’?
– Mahatma Gandhi
9. Which cashier crop is nicknamed ‘Commerce Bag’?
– Jute
10. Which is the national park of Nepal extending to Tibet?
– Lantang National Park
11. Who is the first Nepali UN permanent representative to the United Nations?
– Rishikesh Shah (1969 – 1979)
12. During the time of which Prime Minister, there was a fire in Singha Durbar?
– Kirtinidhi Bista
13. How deep is South China Sea, the world’s largest sea?
– 1200 meters
14. Which mountain is known as ‘Panchchuli Hill’ in Nepal?
– Kanchanajungha
15. Which part of the sun is covered first when the solar eclipse occurs?
– Western part
16. Who is the author of the book ‘Stolen Images of Nepal’ written about stolen statue from Nepal?
– Lainsingh Wandel
17. Who is the scientist who discovers that human ancestors are monkeys?
– Charles Darwin
18. Olymphs Mons is the tallest mountain on which planet?
– Mars
19. When did India become independent of British colonization?
– August 15, 1947
20. Who established the Dharahara and the Sundhara?
– Bhimsen Thapa
22. When was the first note published by Nepal Rastra Bank written by the Government of Nepal?
– B.S. 2063 Ashoj 06 (Note of Rs. 3)
23. Ever since the entry of women into the Nepalese army?
– Since B.S. 2018
24. Who says that ‘Kuber is too poor to spend more than his income’?
– Kautilya
25. In which district is the ‘Ghumte Lake’ located in more than 180 herbs?
– Baglung
26. What is the full form of ‘HTTP’?
– Hyper Text Transfer Protocol
27. How much Yellow Point must you have earned to become the Grandmaster in a Rational game?
– 2500 points
28. Whose is wrote the “Aksharamala”?
– Jai Prithvi Bahadur Singh
29. What were the prizes or items that were given to make the employees happy during the Rana’s period?
– Panful
30. Who is known as the common gods of Hindu and Buddhism?
– Machindranath
31. Where is the headquarters of the OPEC?
– Vienna, Austria
32. Which country is known as lakes Land?
– Finland
33. Which continent is known as ‘Contient of Science’?
– Antarctica
34. Who built the ‘Kashthamandap?
– Lakshminar Singh Mall
35. When did Nepali Congress leader Krishna Prasad Bhattarai leave the party?
– B.S. 2064 Ashoj 09
36. Nepal is the largest cardamom producing country in the world and what is the second largest country?
– India
37. When was Nepal declared as a secularism nation?
– B.S. 2063 Jetha 04
38. On the occasion of which person birth anniversary, non violence day celebrates the  UNO, on 2 October?
– Mahatma Gandhi
39. In which country is SAARC’s headquarters located?
– Kathmandu, Nepal
40. Where did Nelson Mandela die?
– December 5, 2013
Hope you friends, this post may help you known about ’40 Most Important General Knowledge for Loksewa Exam in Nepal’. These GK questions and answers are very important as the view of competitive exam in Nepal. If you have some questions and want to suggest some topics for us, please comment in below section. we will be make a post related your questions.